Communal meals are a big part of the residential treatment programme at Gordon Moody, an opportunity for the cohort to come together at the end of the week. Residents take it in turns to host the communal meal and cook for the others which more often than not results in a culinary triumph. We have had our fair share of gourmets pass through the doors at Gordon Moody, some of them professionally trained, some less so but the gastronomic highlight of the week is always well received and a great opportunity for the residents and the treatment team to break bread.

Sometimes the communal meal can be personal to the host. At our treatment centre in Beckenham a number of cultural meals have taken place to celebrate the diversity of our residents and colleagues. This week our residents were treated to a special and ceremonial Scottish meal cooked by our support worker, proud Glaswegian and former resident Kevan Mailey. 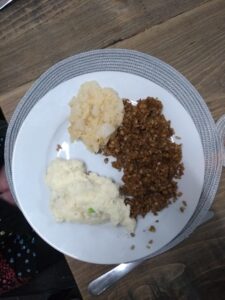 To celebrate Burns night commemorating the famous Scottish poet Robert Burns, Kevan with the assistance of his sous chef, centre manager Dave Hollingsworth prepared the traditional fayre of haggis. An acquired taste traditionally served with neeps (mashed swede) and tatties (mashed potatoes) was enjoyed by those who tried it and was washed down with another Scottish delicacy, Irn-Bru and followed by a slightly less authentic desert of banoffee pie.

“It was a success and really enjoyable to do. Aesthetically haggis, neeps and tatties doesn’t look too appealing but it truly tastes amazing ! We had only positive feedback from all who gave it a go which was great.”

Another traditional part of the Burns supper is the telling of stories and Kevan was kind enough to share his journey. 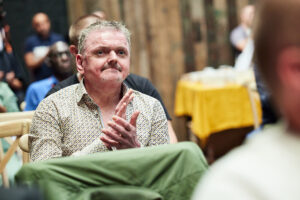 When I searched for a residential rehab providing treatment for gambling addiction back in 2018 and Gordon Moody came up (as the second hit, the first was for a gambling website but that’s another matter) little did I know that name would play a massive part in my life. Not only would they help me get my life back on track after 30 years of gambling but just over 3 years later would provide me with my dream job.

It was the 23rd of July 2018 when I, more out of hope than expectation boarded a train from my hometown of Port Glasgow on the west coast of Scotland and headed for Beckenham in Kent. I Arrived on a scorching summers day 39 degrees nervous, scared and full of fear of what lay ahead in the next 14 weeks.

Right away I felt comfortable, surrounded by people who knew exactly what I was feeling and how my head worked. Over the next 14 weeks I received in my opinion the best therapeutic help available. Every member of the staff team were outstanding and slowly but surely I began to see a light at the end of a 30-year-old tunnel. My self-esteem and self-worth began to grow, I learned the value of money, I learned how to laugh, fell back in love with music which had been a massive part of my life and the thing I never thought would happen met lifelong friends which today I class as family.

Don’t get me wrong it was the toughest 14 weeks of my life there were many tears and many dark days, but I found the desire and commitment I needed to get the most out of my treatment.

After the 14 weeks I went to the recovery house for a further 7 weeks where I received grief counselling to deal with the death of my mum who had died in December 2017, this again shows the commitment of Gordon Moody to make sure I was supported not just for the gambling issues I had to overcome but also and more importantly the emotional issues that go hand in hand with this type of addiction.

I returned to Scotland in December 2018 to begin to rebuild my life and relationships. The last 3 years have been tough but so rewarding and fulfilling and every step of the way there was always help from the outreach department at Gordon Moody.

So fast forward to the 31st of August 2021 and again I walked up McKenzie Road but this time I could not keep the smile off of my face I was going back to the same place that played a massive part in turning my life around to start as a support worker and hopefully in some way try to help current and future residents on the road to a better life .

It has been only 5 months but I have loved every minute. I have to give massive credit to all my colleagues who have made me feel so welcome from the first day and to all the residents I have worked with who have made it so easy for me to settle.

I will be starting collage at the end of this month to start my counselling training which is being paid for by Gordon Moody again a measure of how much the organisation invest in their staff.

As I said at the start I never knew how much the man Gordon Moody would play in my life but I can’t thank him enough and for me it’s only the start of a partnership that will only get stronger in the future.

Sign up now
We use cookies to ensure that we give you the best experience on our website. If you continue to use this site we will assume that you are happy with it.Ok