Gordon Moody’s weekly round-up (14 May 2021): The adventure of a lifetime (relatively speaking)

After a Covid-enforced closure through what felt like never-ending winter months, Stubbers, Beckenham residential centre’s go-to place for outdoor adventure reopened in April. Our residents had heard great things about it from the staff and after some gentle badgering of the manager, we booked in to go.

As always seems to be the case, the weather was kind to us and I met the residents at Anerley station at 7am in bright sunshine. It had the feel of a big day out with the cohort of residents having done the majority of their programme in a lockdown. The journey to deepest Essex was happily an uneventful one with noticeably fewer commuters than we would normally see.

Tranquillity amid the battle

A bus from Upminster took us out into the countryside to the Stubbers Adventure Centre. It felt a world away from the hustle and bustle of London and everyone felt instantly at home.

We met Vanessa who had driven from south London and the friendly staff showed us to our base for the day: a lovely, lakeside boat house that had been built during the enforced closure. We were its first visitors. The tranquillity was instantly calming and the sound of birdsong was audible as I called the office to inform them that we had safely arrived.

Our first of five activities was laser tag. No time for a gentle warm up, we were put into two teams and battle commenced. It was as competitive as it always is and much fun was had by all.

Rolling around in the undergrowth pretending to be commando soldiers was a far cry from the usual Tuesday fare of a Foundation Group. Learning and personal development was still at the heart of the day though.

Between activities we were able to chill out at the boathouse and watch the world go very gently by. No phones, no TVs, no technology at all, just nature.

And it had a calming effect on us all.

Next up was rifle shooting where steady hands and a sharp eye were the order of the day. It was brilliant to see the improvement in everyone’s shooting accuracy

and the encouragement of one another as they took aim.

Lunch was all laid out when we got back to base and there was plenty of time to wander the grounds and breathe in the clean air with the ‘sound’ of silence enveloping us.

Having been cooped up in the house for so long it felt like the adventure of a lifetime for our residents and to do it in the great outdoors made it all the more beneficial; pushing yourself to the limit with the sun on your back and surrounded by the green of the trees and the blue of the water of the many lakes on site. No wonder the guys told me how relaxing they found it even as they embarked on the afternoon activities. 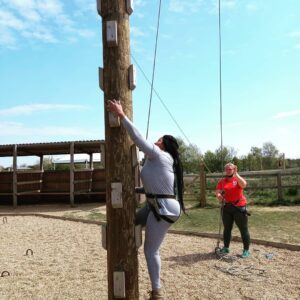 After lunch came arguably the biggest (certainly the highest) challenge of the day: the vertical assault course and the “leap of faith.” Everyone pushed their fears aside and gave it a go. It wasn’t always pretty, there were wobbly legs aplenty, but we all did as much as our bodies and minds would allow.

The support of everyone for each other was wonderful to see and the elation of doing something we didn’t think was possible felt brilliant. For the residents to see staff members being scared, vulnerable but determined was a powerful thing.

After the highs of the climbing activities we thought we were chilling out in two person canoes for the rest of the afternoon. We were wrong.

Serene though it undoubtedly was on the water with no one else on the lake it was soon clear that it’s hard work paddling in tandem and steering in a straight line. We only had one man overboard and he confirmed the water was lovely. I shall take his word for it.

Back on dry land there was time for a warm down before our return journey via bus, Tube, train and walking. We got back without fuss and we were all exhausted but elated.

Stubbers had once again been a highlight of the residents’ time with us and will continue to inspire residents and staff alike in their personal development. It was an early night for all after our 12-hour round trip, with everyone tired but happy after a day living and breathing countryside clean air.