Three Peaks Challenge – Did the team reach their goals?

A group of Gordon Moody colleagues, service users, and family and friends recently took on the Three Peaks Challenge. After four days, over 24 hours on the road, over 1,000 miles travelled – 23 of them hiked, 3,000 meters climbed on three mountains in three countries of the UK, we are happy to report that the team completed their epic challenge. Rob Mabbett, Head of Growth, takes up the story.

What started out as an ambitious idea from David Hollingsworth, Gordon Moody Treatment Centre Manager, last year whilst attending a peer support event in Cumbria finally became a reality in April. Five members of the Gordon Moody team, along with several former residents, four guides, and collaborative partners Richie Paxton from Epic Restart Foundation and Cheryl Williams from Adferiad took on the famous challenge of climbing the highest mountains in Scotland, England and Wales. David said:

“We needed to do something big to recognise the huge milestone of Gordon Moody’s 50th year of providing residential treatment for those severely affected by gambling addiction. The initial idea was to run the event in October 2021 by taking ’50 hours for 50 years’ to complete the challenge, but in the end the sensible decision was taken to climb one peak per day!

“Over the years, Gordon Moody have helped thousands of people reclaim and rebuild their lives, with many stating they would not be here today without the support and treatment provided by the charity. For many starting out on their road to recovery, it will feel like they have a mountain to climb. So the Three Peaks Challenge seemed fitting to show that gambling addiction, like the mountains before us, can be overcome and that at Gordon Moody we are with you every step of the way.”

Months of preparation, training, and planning went into the event. The team donned their hiking gear or running shoes, got on their bicycles, hit the gym or took to the pool, all in an attempt to get fit for the challenge ahead. This, combined with some expert advice from the guides on what to expect, helped us get ready mentally and physically.

Thursday 7th April arrived and we congregated at the Dudley treatment centre ready for the first, and longest, of four journeys as we set off for Scotland and Ben Nevis. As we started to get deeper into North West Scotland, the terrain started to change and we were all admiring the stunning view. A hush descended on the minibus as many of us started to realise the scale of what lay ahead. Mountains passed by one by one with each seeming higher than the one before and we knew the biggest was yet to come and that would be the one we would be tackling in the morning.

We arrived at our first hostel just in time for an energising pasta dinner followed by a briefing from our guides before heading off to bed to get some rest for the mornings climb. This started the routine for the next three days.

Despite some interesting weather on the journey to Scotland, with occasional heavy hailstones, we awoke to a clear and pleasant morning. Although it was cold, we could not have asked for better – given that the forecast a few days before had not been very promising.

The foot of the mountain lay just across the road from the hostel so, after a good breakfast, we set off at the crack of dawn on our first climb. Our expectations had already been set that we would not be able to make the summit of Ben Nevis as heavy snow meant we were not equipped or skilled enough to take on such conditions. The previous week a group had got into serious difficulty and our guides were there to ensure our safety.

It was rumoured that the start of Ben Nevis was difficult but I had no idea what was in store. A relentless climb for over 40 minutes was certainly a wake-up call and I very quickly had my doubts as to whether I would be able to carry on but lifted by the team, and a quick crash course in using walking poles, and I was soon getting into a rhythm.

As expected, the group split into two with one going off ahead and one bringing up the rear and, although I was in the back group, it seemed like no time at all until we reached the snow line. We met up with the rest of the group and the guides offered us two options. As we had made such good time, the lead group could go on a little further if they wanted with the slower group beginning their descent. Or we could all move forward as a group together to see how much further we could get. It was at this point that Kevan Mailey, Beckenham Support Worker, spoke out and said we stay together as one group and that we don’t leave anyone behind. Those words from Kevan will stay with me for a long time and completely captured the spirit of the challenge. From that point on, we knew that whatever we achieved over the next three days would be done as a collective.

Our climb of Ben Nevis took us higher than the peaks of the next two mountains and after a tricky descent – a few say going down the mountain is harder than going up! – we arrived safely back at the hostel with a sense of great pride tempered only by the fact that we had to get a quick change and be back on the minibus to start our journey to the Lake District and Scaffel Pike.

An excellent dinner awaited us at Scaffel Pike and after our briefing, we had a little downtime before heading off to bed to be ready for our next challenge.

A little lie in and a cooked breakfast was welcomed by all the next morning and we made the journey to our next climb. Once again we were blessed with the weather and we started our ascent of Scaffel Pike, which was a much gentler beginning than that of Ben Nevis. The easy beginning was soon over however as, once we crossed a fresh water stream that ran across the mountain, the gradient increased and we were soon trekking across loose shingle and jagged rock. As we neared the snow line, the plunging temperatures meant that the going under foot was becoming very icy. But with the end in sight, we urged each other on towards the summit.

As with Ben Nevis, there was a leading group and a slower group but as was promised in the snow in Scotland, everyone made the summit of Scaffel Pike in record time. Mission accomplished? Well actually not quite! Bracing temperatures of -14 degrees meant that our stay at the top was brief, so it was a quick photo, a quick refuel, and then we began what I can say was the hardest part of my Three Peaks Challenge. The loose rock and shingle which made our journey up tricky, made coming down incredibly hard and by the time I had made it back to the stream, which signalled a gentler descent back to the minibus, a few of us – me included – were starting to feel the strain.

It was a fantastic achievement and there was a real sense of accomplishment in everyone getting to the summit, but the journey was a mixture of jubilation and trepidation as we made our way to our final peak, Snowden in Wales.

We arrived at Snowden on Saturday evening with the finishing line in sight. Conversations on the minibus previously about the difficulty of each of the peaks had been around each one decreasing in difficulty as they went along. Ben Nevis had been the most challenging, followed by Scaffel Pike and then Snowden. This was not how the conversation went over dinner, the fatigue felt by us all meant we were under no doubt that the final climb would be a strong challenge.

For the final morning we were met once again with perfect weather and the camp was well rested and in good spirits for our final ascent. Interestingly, some of those that had gone on ahead on the previous two slopes decided to stay back and go at a more gentle pace, taking in the experience and the scenery as well as sharing in the experience of the challenge.

Snowden presented a different challenge to that of the previous climbs, with parts of the ascent requiring some ‘scrambling‘, where we had to pull ourselves up some steep rocks. But with the end so close, we all found the strength to make it up those last few rocks and start our final climb towards Snowden’s summit.

The fatigue seemed to disappear and was replaced by feelings of joy as we all reached the top of Snowden and completed what was one of the most ambitious challenges undertaken by Gordon Moody – certainly in its recent history. The stories shared and camaraderie of those few days will live long in the memory, certainly longer than the memories of any muscle pain or blister. I was so very proud to have been a part of the experience and learnt so much from those I travelled with. All of us in some way have conquered our own mountains in the past and for many like our Three Peaks Challenge, the only way to accomplish this was by working together.

We would like to thank all those that supported us on our journey up and down all three peaks. We raised an impressive total of £22,500 and the team couldn’t be happier.

The last words must go to the organiser, David Hollingsworth:

“It was a huge undertaking to put the event together and we had initially planned on assembling a team of 50 people. In the end, the intimacy of doing the challenge as part of a smaller group worked really well. It allowed really strong bonds to form between us all, new friendships were made and stronger recoveries were cemented.

“The challenge was a memorable way to mark our 50th anniversary and if I can summon the energy to organise it once more, I would love for it to become an annual event meaning more people associated with Gordon Moody can say ‘I took on the Three Peaks Challenge and I conquered them all.'” 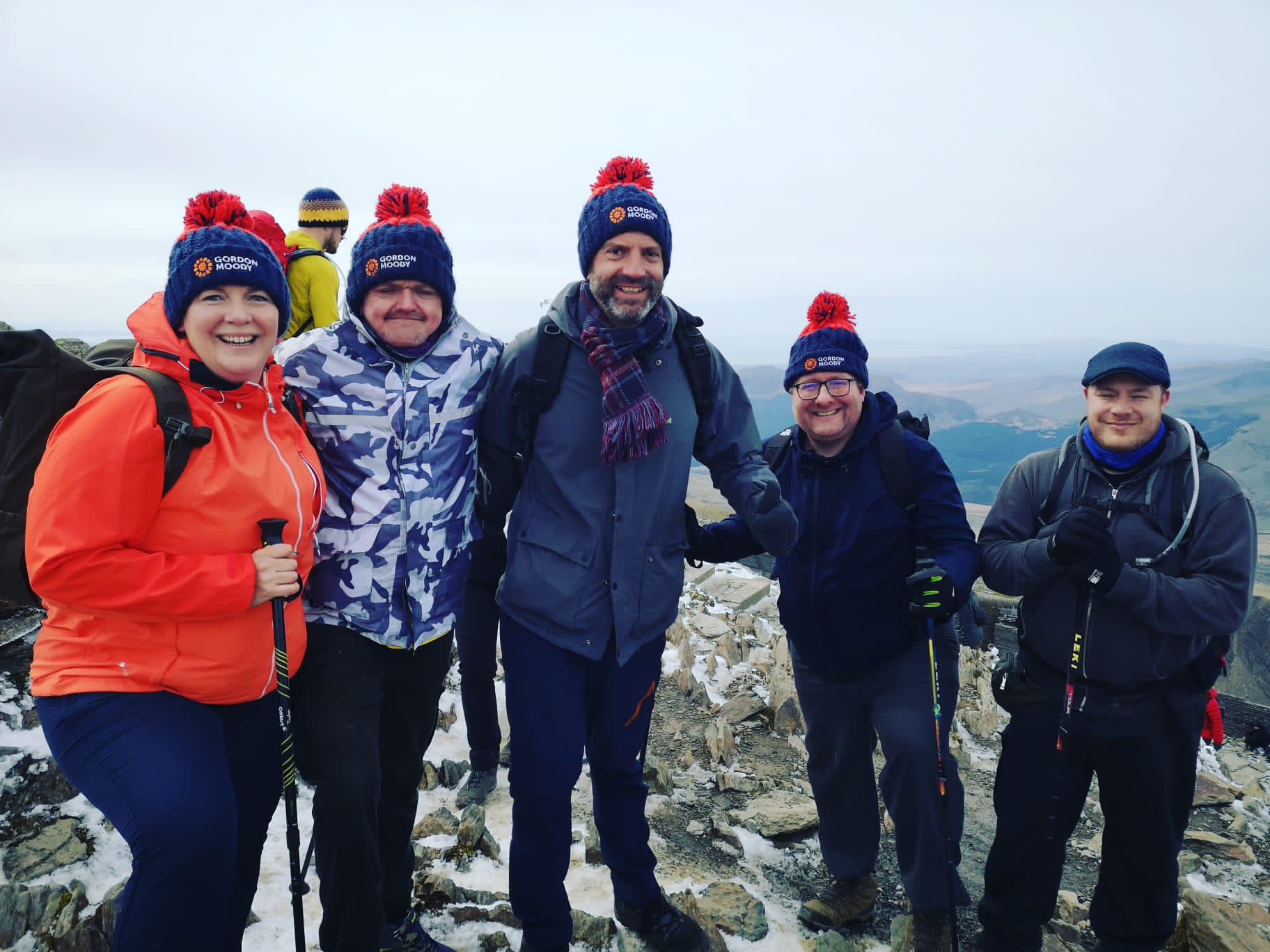 If you are concerned about your own or another’s gambling – Gordon Moody are here to help. Lets tackle gambling addiction together.

Sign up now
We use cookies to ensure that we give you the best experience on our website. If you continue to use this site we will assume that you are happy with it.Ok