On the afternoon of Friday 8th July 2022, a group of Gordon Moody employee’s, service users, and ex-service users came together to take part in a 5-a-side football event called The Moody Cup to raise money for Mind.

The tournament took place at the Goals centre near to the Gordon Moody head office in Dudley and teams travelled from across the West Midlands, as well as from our treatment centre in Beckenham, to take part, all in the hopes of winning The Moody Cup.

With the sun blazing down on them, five teams stepped up to take part. The teams were:

The round robin had two games at a time, which were played simultaneously on two pitches, with the winner of each match getting three points, a draw getting one point, and a loss getting zero points.

The first games pitted Pretty in Pink against Jackson 5-a-side and on the other pitch More Than Goody FC against Badder in Blue. Both matches had thrills, multiple goals, and some very vocal spectators (mainly towards the referee on pitch one!). The final scores were:

Game two pitted Jackson 5-a-side against the Beckenham Ballers and on the other pitch Pretty in Pink played More Than Goody FC. There were lots of goals scored, and some questionable calls for penalties but the final scores were:

Finally Pretty in Pink got time to relax and game four had Badder Than Blue playing the Beckenham Ballers and fresh from their rest, Jackson 5-a-side played More Than Moody FC, who were playing their fourth game in a row! There didn’t seem to be much slowing down from any team, with the final scores being:

The last game of the round robin was upon the teams and More Than Goody FC got time to reflect on their four game winning streak and await the final outcome of who would progress to the final. Game five had the Beckenham Ballers playing Pretty in Pink and Jackson 5-a-side playing Badder in Blue. Drumroll for the final scores … :

With all the round robin games completed, the final standings were: 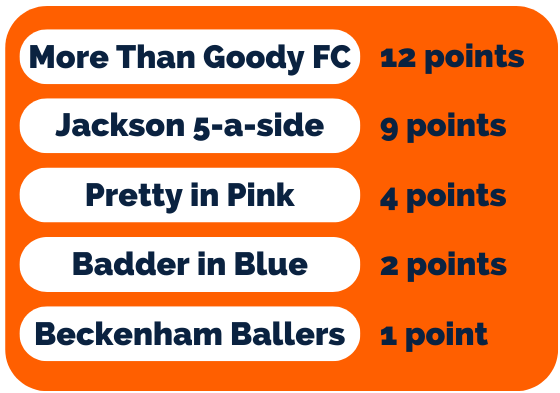 After a well-earned break, the final saw the top two scoring teams of the round robin take on each other to win the title, and take home The Moody Cup. 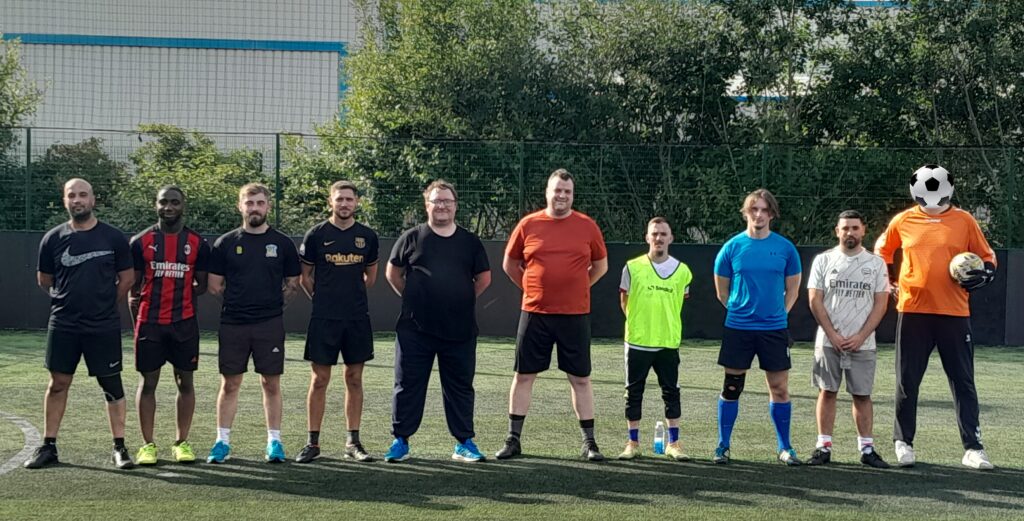 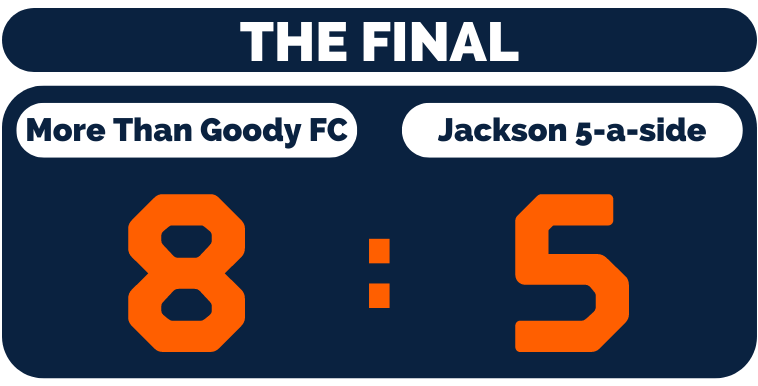 So, More Than Goody FC were the winners in the end – scoring an impressive 47 goals across the tournament. The team were proud to pose with the cup and it now sits in pride of place at the Dudley treatment centre. 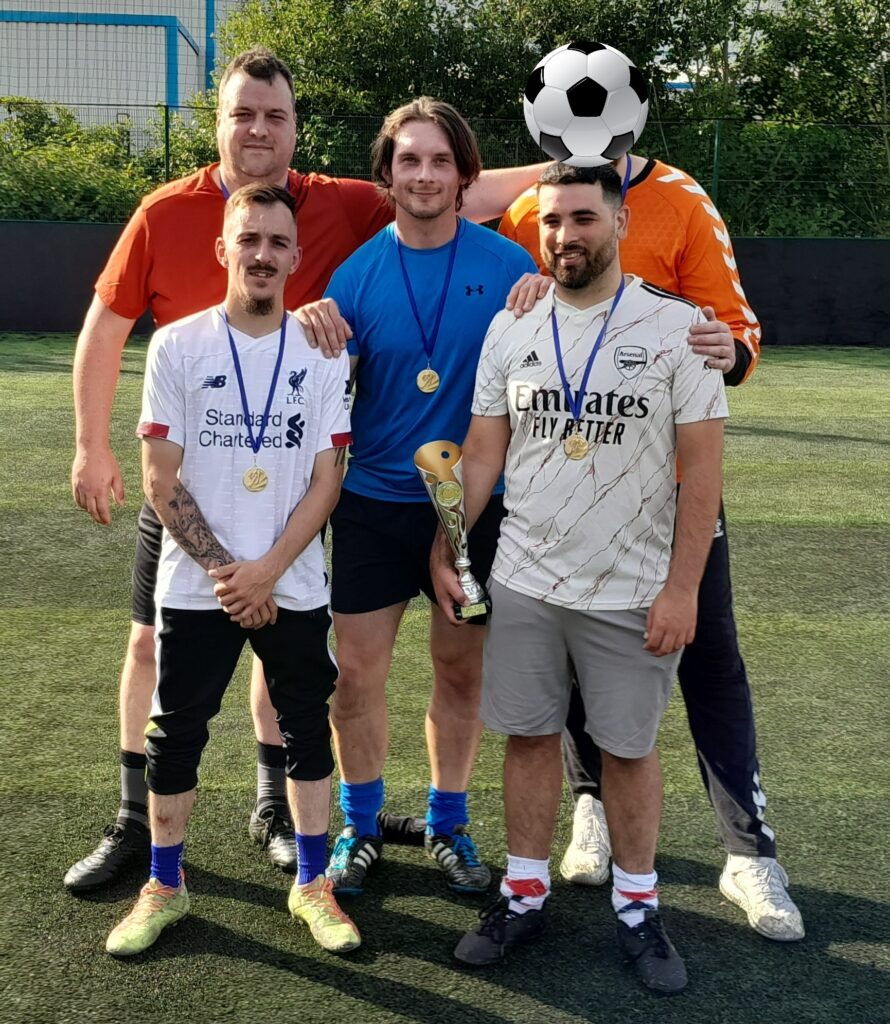 Thank you to everyone who took part, the spectators, the referees Shannen and Brandon (who had to endure a lot!), and to our organiser Jack. Everyone had a wonderful time and talks are already ongoing about the next event. Will it be tennis, netball, basketball, volleyball, rounders, the choices are endless. Stay tuned! 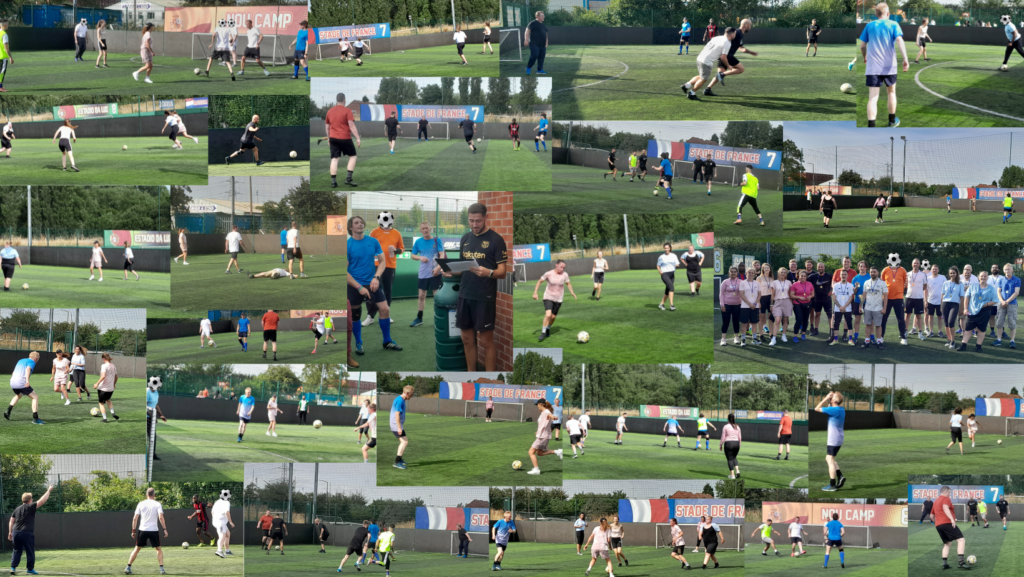 Whilst we have raised over £200 already, you can still donate via the Just Giving page. All donations are welcome, and 100% of the donations go towards Mind and will help them provide advice and support to empower anyone experiencing a mental health problem.